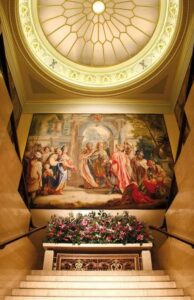 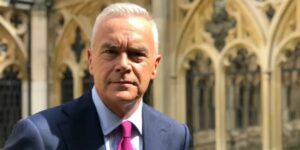 Huw Edwards is familiar to us all as the main presenter of the flagship news broadcast, the Ten O'Clock News on BBC One. Although predominantly a news journalist, during his career Huw has presented a wide range of programmes on television and radio. To mention only a few broadcasts involving Huw: he led the BBC commentary team at the opening and closing ceremonies of the 2012 London Olympics,the 2014 Commonwealth Games and the inauguration of Barack Obama. He presented the BBC's coverage of the wedding of Prince William and Catherine Middleton, for which he and the team won a BAFTA Award for Best Coverage of a Live Event. Huw has a particular interest in history and has presented documentaries on many historical subjects, including Owain Glyndŵr, Gladstone and Disraeli. The fascinating historical documentary series entitled The Story of Wales can also be attributed to Huw. On a lighter note, he appeared as himself in 2012, in a cameo role in the 23rd James Bond film Skyfall! Huw is married to Vicky Flind, a BBC producer, and they live in Dulwich with their five children.

We will be honoured and delighted to welcome Huw Edwards as the guest speaker at Cinio Haf 2022. 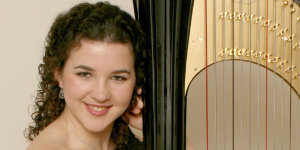 Glain Dafydd’s music career includes successes in competitions such as winning the 4th Rencontres Internationales de la Harpe en Île-de-France, the Bryn Terfel Scholarship Competition, the National Eisteddfod Blue Ribbon and the “City of Szeged Prize” at the Szeged International Harp Competition, Hungary. Glain studied at the École Normale de Musique de Paris and at the Royal Academy of Music. As a soloist and chamber musician Glain has performed in venues such as the Wigmore Hall, Royal Festival Hall, Cranleigh Arts Centre, Foundling Museum and the British Embassy in Paris. She toured the USA as a guest soloist with the Penrhyn Male Voice choir, performing in Columbus, Washington, Vermont and Glens Falls. She has performed at festivals such as Salvi’s Harpissima, the Fishguard International Music Festival, Three Choirs Festival in Gloucester (flute and harp duo) and MusicFest in Aberystwyth. She also performed at the Suoni d’Arpa in Saluzzo following her success at the 4th Rencontres Internationales de la Harpe en Île-de-France, and will be adjudicating at next year’s competition. Glain is an artist with Live Music Now, providing music at hospitals, care homes and special educational needs schools. She also teaches at Queen’s College London and at Hampstead Harp Centre.

Visit us on Social Media: